At the beginning of this year my Motorola Droid 4 phone started dying on me. I looked for help on the XDA Developers Forum where I kept track of the different steps I took. For archiving reasons I created this write up to have a single page containing all information that I found on the issue. Sadly enough I was not able to repair the phone, however I was able to recover my data by rooting the device. The original XDA Forum thread can be found here: http://forum.xda-developers.com/showthread.php?t=2552978

It seemed I had the exact same problem as described in the first post on the issue by someone else, and my issues started only recently. To give some more information, these are the phases the phone went through:

It started with the phone acting like the proximity sensor was activated, the screen would go out at random times or turn off and on. I got the idea it was the sensor next to the right of the Motorola logo, there actually was a scratch right on this sensor and I thought this was the problem. When I would put my thumb over this sensor the phone would work normally as long as I kept it covered, alternatively the phone would work normally when I would slide open the phone.

The next part was that the screen no longer would come on when I pressed the power button, it would activate some part of the backlight, but the screen would stay black. Rebooting the phone would help, the Motorola logo showed fine, then the Droid logo came on fine and also made sound. But the moment where it should show the SIM lock screen in Portrait mode it did not show anything at all anymore. Sliding the keyboard open resulted in showing the SIM lock screen, however it would not take any input from the keyboard at that moment, so I could not unlock the phone.

Sadly enough the next phase of the failure is the screen shown in the image below Â (it doesn’t even show the Motorola boot logo anymore), so the phone can no longer be used and also [email protected] does not show any screenshots anymore. However the phone is still being recognized by ADB. 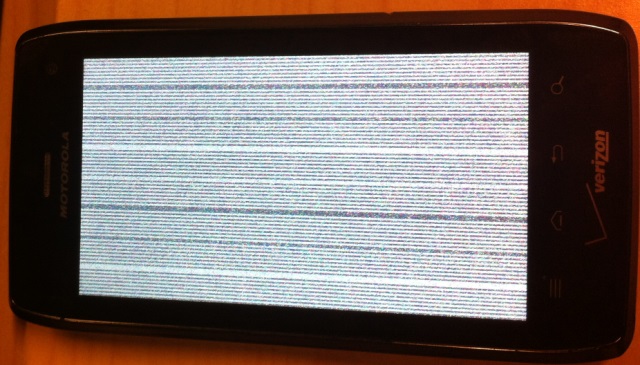 I got the feeling the problems are a combination of some hardware problem and the software reacting very badly on it. I originally had the idea to disable the proximity sensor somehow by flashing a different rom (running stock now). However I ended up not following that road.

The last phase is the phoneÂ notÂ showing anything at all anymore. Some boots it might show the white scrambled screen from the start, but most of the time it isÂ just a black screen. However, connecting to it can still be doneÂ through adb, but since the phone was not rooted this gave limited possibilities.

I do know it is a phone and not a typewriter

The SurfaceFlinger error might be where the problem is.

Like suggested on the Forum I tried fastbooting to the stock firmware (http://forum.xda-developers.com/show….php?t=2207384, option 2). This did not fix the issue for me neither.

Before trying the fastboot stuff, be sure to have a full battery (the battery might keep draining because of the constant white scrambled screen). To check the battery status with adb use:

Because the screen became more and more faulty over time one of the theories was that the flex-cable of the screen might have been broken. I have had this problem in the past with Samsung clam-shell phones, and I actually hoped this issue would not exist anymore in the current day. But it would explain the phone slowly degrading more and more until it doesn’t do anything at all anymore with the screen. My next step step was to take the Droid 4 apart to see if the flex-cable was indeed broken. However, before doing that I first wanted to recover my data from the device. After doing that (which is described in the next part) I took my Droid apart, however the LCD cable did not have any clear rips in it, only some really small marks, which might as well have been the result of taking it apart. I could have ordered a new LCD cable to see if replacing it would help.Â But I never bought the LCD cable, because it was almost 50% of buying a new (2nd hand) phone (from Ebay), so I went with that option. I made a picture of the Droid 4 after taking it apart, so people know what they are up to…

Since the phone was not working anymore my focus was to recover my data from it. However, the problem I was facing was that I could not access the user files on the phone since I did not have root rights. The solution I sought for was getting root access on the Droid4 by exploiting a vulnerability.

I looked in to using the exploit by Dan Rosenberg on this device to get root access (http://vulnfactory.org/blog/2012/02/…ty-experiment/ ). However this exploit needs a device which actually boots. Which in this case is not happening, so this exploit does not give root permissions. Because I only had adb access to a not fully started system the exploit by Dan Rosenberg did not work so I had to look for something like a kernel exploit. I luckily had some help from some friends, and they pointed me to the following exploit which worked: https://github.com/android-rooting-tools/android_run_root_shell

It seems that the Droid 4 is running Linux Kernal 3.0.8

To use the exploit, compile the source code and copy the file to the Droid4 (also copy the device.db file):

You can copy the files to the /data/local/tmp directory on the phone (you can write here as a user without root rights), make sure to make the file executable and then run the exploit. The exploit can find all the values it needs itself (slow) or get them from the device.db database (fast), for a single use root exploit the slow approach will do, but if you need to use the exploit a couple of times I recommend to use the device.db. The device.db on the site did not contain the Droid 4, so we had to find these values ourselves. You can insert the following information in to the device.db file to add the Droid 4.

Output of the slow version of the exploit (without the information added to device.db):

The fast version of the exploit (with the information added to device.db):

With the non-root user now having access to the partitions, you can download them with the following commands.
For the userdata partition:

For the full disk inside the phone:

For the sdcard it will be:

This pull request will take a while, statistics from downloading the userdata partition and whole disk on my machine:

To read the information from the partitions you downloaded you can, among other things, mount them in Linux or use a tool like FTK Imager on Windows.

I would like to thank and credit both blasty and ius for helping me out and finding the right exploit plus device.db values. In case anyone needs the compiled exploit and updated device.db file, they can be downloaded below: